How I fell in love with video games and localization

How I fell in love with video games and localization

For a guy who spends the bulk of his time localizing video games into Russian I never actually told you why I choose video games in the first place.

So when I did a massive interview for Trados at the end of last year, it hit me:

“Every superhero has an origin story. Why not me? :D”

Now, I’m well aware that I’m no superhero, but I thought it’ll be fun to travel down the memory lane and figure out how I fell in love with video games in the first place.

It sounds crazy when I say it out loud, but I’ve been playing video games for a little more than 23 years.

And even though the very first video game was developed long before I was born, I still consider myself a veteran gamer.

What does my dad have to do with my passion for video games?

Video games have always been that special bond that Ishared with my dad.

Well, we still share this bond and he still plays video games despite being in his 50s.

Actually we started playing video games at the same time, with the only difference that I was 6 and he just turned 30.

For us it was both an escape from the pretty dull reality and a way to connect with each other.

I still remember how we played Battle City for 12 hours straight while my mom was at work on her night shift.

These memories are very dear to me, so now that I have a little munchkin of my own, I’m really looking forward to creating the same memories for my own kid.

My dad actually convinced his superior officers to buy a computer for his military unit under the pretense of doing paper work and using it for printing documents.

But let me tell you a little secret: the real reason was to play Doom, Quake, and Return to Castle Wolfenstein. 😀

So, imagine my excitement every time he took me to his work where I’d spend countless hours on the computer, playing all sorts of wildly age inappropriate games (strangely enough, I turned out just fine, plus I had plenty of stories to share with my school buddies).

Our mom, however, was no superior officer so it took a lot more convincing than just “we need it for printing documents”.

If I remember correctly, I actually had to work really hard to make sure my marks are perfect, so that my dad and I could make a better case for buying a computer (after all, a kid needs it for home work and stuff).

We succeeded eventually (I believe around the time I turned 14), but before that happened I had been spending a good chunk of my time at my friend Zhenya’s place where we played video games.

You see, Zhenya was pretty lucky because of all of my friends he was the first one to get a computer, so the rest of us would spend hours and hours watching him play (yep, we invented Twitch before it was mainstream) 😀

From the first moment I experienced video games I knew that I’ve just discovered something that is so much more than a way to spend your evening.

Even though the first games I played were pretty linear and simple, they still offered so much more than entertainment.

They were a form of art. An embodiment of someone’s work and vision.

They were telling stories. Teaching even.

I can’t believe how lucky I am because I was there to witness the rise of a video game industry.

I also cannot believe how technology has evolved over the past 20 years and how progress made it possible to tell even more complex stories and to create truly innovative gameplay mechanics.

I’ve been there and watched it unfolding right in front of my eyes and let me tell you something: it was glorious.

Throughout the past 23 years I’ve played hundreds if not thousands of video games and I’ve genuinely enjoyed every single one of them.

Of course, I’m a bit biased, because I work in this industry, but I think every game deserves its place under the sun and we should celebrate the people who work countless hours and risk everything to create those memorable experiences for us.

I know that sometimes developers can feel frustrated and even discouraged because of the comments and feedback they receive (social media really enables hatred in my humble opinion), but I just want them to know that there are players who appreciate and value your work even in this day and age where we have instant access to information and can be super picky.

How come I love all games?

It’s funny, because if you love a video game it doesn’t mean that it’s flawless.

It also doesn’t mean that others should love it too.

I love the games I play, because my rich experience with this media helped me understand them better. I’ve learnt to appreciate the work that is involved into making them.

And I’ve learnt to accept one simple truth: games are made by people and sometimes people can make mistakes.

I don’t bash developers because games are glitchy or have problems.

I’ve come from a background where the variety of games was really scarce.

I didn’t get to nit-pick and I played every single game I could get my hands on when I was a kid.

Sure, looking back I can definitely say that Mafia, Max Payne or Metal Gear Solid were better than, say, Die Hard: Nakatomi Plaza, but I’ve had my fun with all of those games and I’m definitely going to teach my son to appreciate the games for what they are – little pieces of art and an embodiment of someone’s hard work.

So, just like I’ve come to appreciate it myself, I’ll teach my son to appreciate the video games we’ll play together and make sure that he’s always respectful of someone else’s work.

Being a translator by trade I would’ve never imagined that I’ll manage to align my two passions.

Yet, somehow, I managed to find a way.

I don’t remember exactly how I ended up in video game localization.

Probably with lots of luck and perseverance. 😀

I did, however worked in a variety of fields before I arrived at my final destination, but I’m really grateful I had that journey.

Although the process is very complex and grueling at times, it’s a lot of fun.

And I’m definitely not going back to those legal or technical texts that I worked with previously, haha!

One could even say:

“Once you’ve become a video game translator, there’s no turning back for you.”

It took me years to align my passions together, but I’m happy I managed to connect those dots and found my ikigai 😀

What will happen with video games in the future?

Although making big bucks in video game localization is not always that easy (but that probably requires a separate blog post), the video game industry is huge right now.

It’s a great industry to be in and the future is quite bright.

It’s also a very exciting time to be a gamer.

The sheer amount of top-notch AAA and indie releases that we’ll be playing in the upcoming years is a clear indication that video game industry is in excellent form and the development of such technologies as VR and AR will take us to places that we thought were only possible in science fiction (mark my words on that).

But enough about me!

I’m a huge fan of video games, but I also love meeting like-minded people who share the same passion.

Share your story in the comments bellow or, if you’re a blogging translator, why not publish your own blog post and share it here and on The Open Mic? 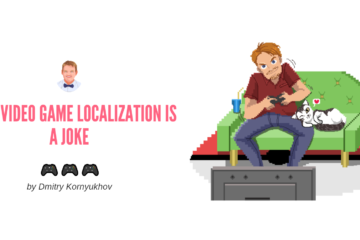 For Our Awesome Clients

When Video Game Localization Is a Joke

Hello, friend! Despite what the title of this post suggests you won’t find sensationalized journalism in here. We have that in spades in video game industry and there’s no point of adding more. Instead, I Read more…

How do you break into video game localization?

Check out my 2,000+ words interview on the ins and outs of video game localization

Ok, it’s time for some New Year’s resolutions! I do hope that next year I’ll have more time that I’ll be able to dedicate to this blog and my favorite field of expertise: video game Read more…